Andy Howell has always been one of skateboarding’s sages. He’s an artist and intellectual thinker who discerns patterns, seeks out connections and is unafraid to grapple with the biggest themes of all. Story-telling. Humanity. Technology. Life. Rebirth. You know – the good stuff.

You can see it in his career, and the sheer number of ways he’s found to express himself creatively over the years. There is, of course, his storied career as one of the most progressive influences in skateboarding, whether as a pro, or through his involvement with game-changing brands like New Deal, Zero Sophisto, Underworld Element or 411.

It is equally evident in his career as an artist and patron of international repute, a strand to his story that includes collaborations with peers such as Shepherd Fairey and Jeff Kinsey. And it runs through his later incarnation as a the founder of visionary tech start-ups, his role as an investor, and his typically progressive involvement with the 30th anniversary of New Deal Skateboards.

And now Andy is on the brink of a new frontier, as he processes the incident that changed his life at the end of 2019 – the fire that destroyed his family home and, with it, the collection of artwork he’d been collecting and curating for over 30 years.

It’s a blow that has changed Andy’s life completely, and an experience he is still learning how to process. With all that in mind, I’m grateful for Andy for even agreeing to come on the show in the first place.

I’m so glad he did though, because as you’ll expect if you’ve followed Andy’s career, this chat with one of skateboarding’s most original thinkers evolved into something really fascinating and unexpected. 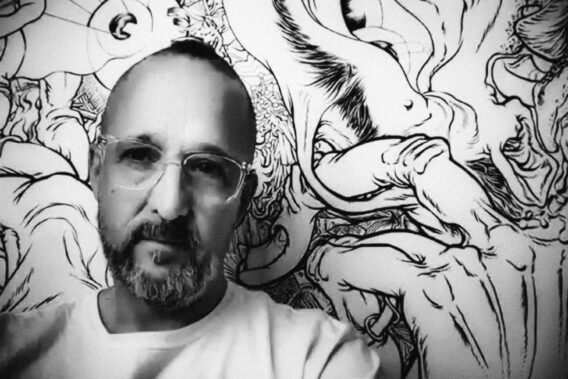