“When looking at the bigger picture, you want to view it through a small window.”

I’ve interviewed almost 100 guests in the two short years I’ve been putting together this podcast, and they’ve all got one thing in common – at some point, they shelved everything and dedicated their life to their passion.

It’s particularly true of professional athletes. After all, there’s no other way to make it.

But what if you reach the top and realise that – whisper it – there’s more to life your chosen sport? And that maybe this thing you’ve dedicated your life to perhaps isn’t the path to personal satisfaction and existential happiness you thought it was?

That’s the premise at the heart of Elias Elhardt’s latest film project, Contraddiction. It is a beautiful piece of work that is a treatise on the essential uselessness of the snowboarding lifestyle. It is that rare thing – an action sports film with a point of view beyond ‘Woo-hoo! Let’s shred’.

As you’ll see if you watch the film, Elias has a lot of very interesting things to say about snowboarding, but also about how these activities link to self awareness, and how perhaps there might be something more to this while business than sliding sideways. And how it might, as a professional, behove him to use his platform to investigate this possibility. In this he takes his place alongside peers such as Christian Haller, Jerome Tanon and David Benedek who are also exploring similar themes in their own work.

As you’ll know if you’re a regular listener of the show, these themes are right up my strasse, so while I was in Innsbruck in June 2019 I visited Elias at his place, and sat down to discuss these themes, and find out more about his new project which saw him spend five weeks in Kosovo.

I very much enjoyed my thought-provoking conversation with Elias and I hope you do too.

Listen to the episode here:
< 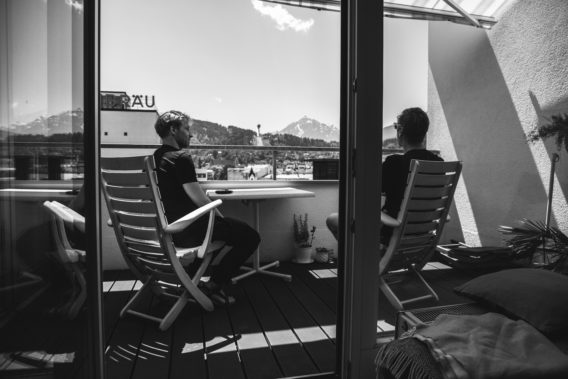